It’s usually better to learn something through practice than in theory. And this is why we decided to devote our next webinar to one specific case, where we demonstrate how OSINT tools were crucial to the success of an investigation into international money laundering.

Join us on Friday, 22 July at 1pm UTC for the event: OSINT Case: Countering Global Money Laundering. We’ll be presenting a full authentic investigation, where we’ll detail the techniques and tools used to identify two frauds who had money laundered in Europe and then rechanneled to accounts in Africa.

Why it is important

Internet fraud is a spiraling global concern. According to the FBI, in 2021 alone, people lost around $7 billion through ransomware, scams, and extortion, with over 6.5 million crime reports recorded by the Bureau overall. And figures are expected to increase.

With populations being defrauded of so much money on a regular basis, scammers need to find a way to legitimize their ill-gotten gains. However, this often isn’t easy, and launderers leave all-important trails that the switched-on investigator can pick up on.

What we will be discussing

OSINT specialist at Belgium’s Federal Judicial Police, Christof De Windt, will be joined by Social Links’ Ivan Kravtsov to demonstrate an entire investigation. Running through the case from the investigator’s perspective, we’ll show the logic behind the decision-making as the case unfolds.

In two key stages, you will find out how investigators used SL Professional and Maltego to get the workable data they needed and make crucial connections which were central to the case’s success. The Result? Identifying two frauds who had received laundered profits of around 2 million EUR.

Register now to reserve your place! 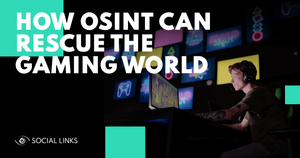 
Extremism & Financial Fraud: How OSINT Can Rescue the Gaming World


OSINT and the Gaming Sphere Part #2: Extremism on Discord